Hey folks, I just wanted to share a success story here, as well as create a spot for folks to talk about their own experiences with this.

I finally bought an Expert Sleepers ES-9 after putting it off for months. (Honestly, I’d been putting off doing that sort of thing even longer.)

For anyone who isn’t familiar, the ES-9 is a Eurorack module that connects to a computer (or iPad, etc!) and provides you with 8 outputs and 14 inputs, expandable to more. But, it’s a DC-coupled interface! Meaning, you can send audio and control voltage (CV) to and from your modular synth / etc, from e.g. miRack, or other software.

So, for a test, I put a Macro Oscillator 2 module into a quick setup on miRack, and a Mutable Instruments Plaits module in my physical Eurorack setup. I ran a sequence from my hardware sequencer (Ornament & Crime) into both - and ran the audio from miRack back into my Eurorack mixer.

Everything worked great! Now, regarding the ES-9 specifically, you will need to change the ports to DC coupled rather than AC coupled. There’s a setup utility that lets you do this, available on OS X, Windows, and web. But, at least on iOS 12.1, the web version won’t work, as Safari doesn’t support Web/Midi.

Caveats? Well, there’s a small amount of latency, though I haven’t done much to try to address it. (Buffer Size is at minimum, but increasing the sample rate would also probably be a big help!)

Incidentally, this is a first gen iPad Pro 9.7", and I’m using a (generic if I recall) “camera connection kit” to connect the ES-9 USB device to my iPad. No setup was required beyond that, though! (I maybe had to exit and restart miRack, but I’m not even sure if I had to do that!)

So, what else are folks exploring?

I believe ES-8/9 (and expanders) are what most people are using, at least I haven’t heard much about other interfaces. ES ones work great, fit into Eurorack, well, rack - what else you may need.

I recommend getting the second version of “camera connection kit”, the one that also has a charging port. Also I’m using just a cheap USB 2.0 hub to connect a keyboard and ES-8 to iPad at the same time, and can confirm this works without issues, too.

Also I’m interested in physically integrating iPad into Eurorack setup. iPad Mini has almost the same width as the rack height, may be interesting to make a holder for it. Or some sort of a Eurorack-mountable holder for bigger devices.

Hey there, I just got the Es9 as well. I just had 30min today to test it out alongside my rebuild case but havn‘t been able to figure out how to send cv from miRack directly to the 3,5mm connectors of the Es9. I did send and receive audio from and to AUM. What virtual modules am I using for connecting the ES-9 in miRack? And how do they correspond to the physical ports/how are they numbered? The esx8 encoder did not seem to work.

For ES-8/9 modules themselves (not expanders) you don’t need anything other than a standard audio input/output modules in miRack. Just increase the number of channels in the module menu (double-tap the module).

For ES-8, there’s no configuration, the channel numbers on audio modules in miRack directly correspond to physical port numbers on ES-8. For ES-9, as I understand, you can reassign channels but I believe it should work out of the box, too. You may need to set input ports to DC-coupled using the config tool as mentioned above.

In any case, I suggest to enable say 8 channels in the menu of the standard audio output module in miRack, connect some signals to its port and see if the jacks on your ES-9 will light up.

I want to buy an es9 maybe someone can make a video as it integrates into VCV Rack iPad?
Greets Gollum

There’s a bunch of videos about using ES modules with VCV Rack, it’s pretty much the same for miRack on iPad, just the audio modules look different. For example these two are about ES-9: this and this.

Thanks for the note regarding the config on the ES-9, is it just about setting inputs to DC? I’ve used outputs for clock and they were ok.

Agreed on all above, ES-8/ES-9 is a perfect combo for miRack.

Yes optional DC blocking filters is for inputs only.

Thanks for your reply! This works perfectly while using miRack by itself with the Es9! I experience next to no latency and the possibilities of my portable rack have been multiplied, very content!

The issue itself remains as that with AUM running the outputs don’t work in miRack. The 14 inputs still work parallel, so you can feed the signal both to miRack and AUM. Whereas the 8 outputs corresponding to channels 8-16 on the virtual Output seem to be blocked.

Sorry from your message it’s not quite clear what exactly you’re doing. Are you running miRack AUv3 inside AUM or just standalone miRack alongside AUM? If the latter, I’m not sure it’ll work as miRack and AUM will try to configure audio interface for different number of channels. But I’ll try it later today and see what happens.

Well sorry for being unclear. For me the 8 outs (channels 8-16) only work when running AUM and miRack separately. When miRack is being hosted by AUM one can not send cv or audio from miRack to the Es9 TS outputs.

I’m diving into eurorack - es-9, modules and case are on their way.

How are you getting on with your setup? Any tips or tricks with this hybrid setup?

Since I am too cheap to buy an ES-8/9, I got mirack working with my DIY interface made of a modified cheap chinese soundcard. I bypassed the blocking caps and amplified the signal with opamps. Gives me 6 dc coupled outs tracking over about +/- 8v.

Hello. I’m pretty new to this thing and I want to ask you if I can use the app like an effector and feed it via an audio cable. I tried alot but it works just with the built in microphone. I don’t have the Expert Sleepers module. Thank you!

Yes you can. I believe you’ll need an external USB audio interface. It doesn’t need to be a specialised one like for the audio. For example U series of Zoom audio interfaces (https://zoomcorp.com/en/us/audio-interface/) are good and not too expensive, and most also provide MIDI IO.

Thank you for the answer. But how i can, I already have an audio interface. Can you explain the routin please?

Tried sending some CV to miRack from an es-8 today and this is what I got from a simple triangle lfo from maths: 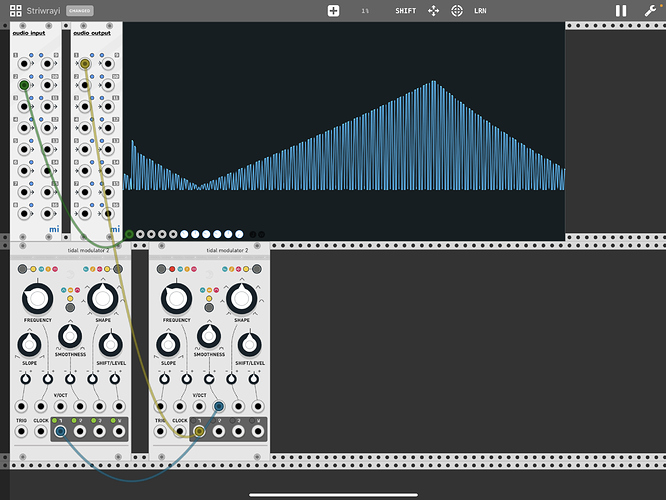 Is this due to mirack requiring dc coupling on certain inputs? I’ve not been able to find a configuration tool for the es-8 like the es-9 has to do so, if that is the case. I connected it to VCV rack and it works fine. Audulus shows the waveforms correctly as well. The tides are just there to help me test.

Curious on what this could be, i’d like to be able to send CV to miRack from my modular via ES-8… Thanks for any help!

Can you post a screenshot of VCV or Audulus of the same signal for comparison?

Sure, it’s just a triangle wave… here from VCV 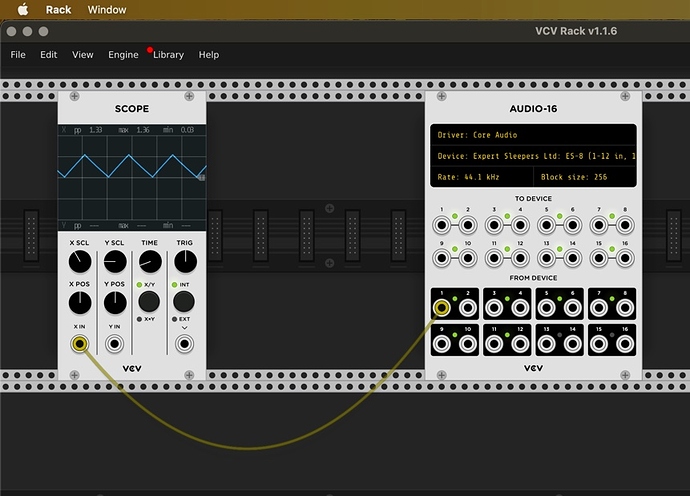 And audulus (can only post one image per post apparently?). All the oscilloscopes I’ve tried in mirack show this strange version of the waveform posted three posts above… It’s like every couple frames it cuts out and drops to 0 then back up, like the polling is not fast enough or something…

This is on an ipad pro, latest model, latest OS 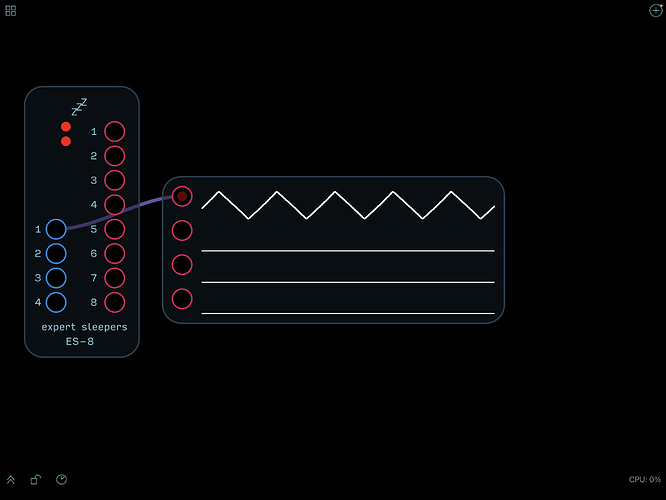